Bay Watch  is a powerful, masculine and very correct buck. He is angular and dairy, with a strong front end and wide rear leg set.

Bay Watch was an extraordinary sire, producing innumerable sons and daughters that proved themselves in the showring and the milk pail, and ultimately through their own progeny as well.  A few include Morning Lark, Obsidian Bay, Grand Finale, Fantasea, Perfect Storm, Aragorn, Piddlin Acres Picachu, Giacamo and Shining Sand. His milking daughters are living up to our expectations, with tightly attached udders, good capacity and nice size, well placed teats. His influence is strong not only in our own herd but in herds across the country.

*B CH Algedi Drops of Jupiter 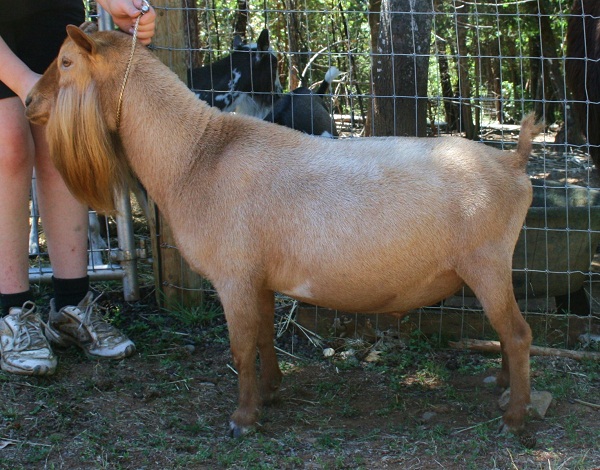 This is a spectacular buck that we feel so fortunate to have contributing to our little herd.   Not only does this guy boast wonderful general appearance, extremely correct feet and legs, a long and level topline, and great width and capacity through out, he also lays claim to a respectable show record, including two Best In Shows against some top quality standard bucks.  But even more impressive is his kids; he's consistently passing on his level topline, dairy character and feet and legs to his offspring.  Jupiter is consistently putting well attached udders on his daughters with lovely MSL, butter soft texture, extended fore udders, and large teats.  He now has three finished champion kids to his credit, including a daughter with her SG designation, an LA score of EEEE 91 and five BDIS, and two daughters with DHIR milk stars.

Updates: Jupiter's kids are certainly rising to meet our expectations, placing near or at the top of their class consistently.  His '06 doe out of Tupelo  (Splash O' Honey) snatched up her Jr. leg, along with a Jr. Reserve at her first show, and has been placing at the head of her class as a milker.  As a third freshener, Splash is now finished!  Her littermate sister, SGCH Honey Dew, easily completed her ADGA and AGS championship as a second freshener, picked up four BDIS along the way AND earned herself a Linear Appraisal score of EEEE 91!  His '07 Tupelo (Amrita) daughter placed 1x 1st and 3x 2nd as a Jr., and scored VVVV FS87 as a first freshener.  Jupiter also has a finished champion son (CH Smokin' Hot Honey) out of Tupelo who, in turn, is producing stunning daughters with gorgeous udders.  Another son (Desperado - see below) has produced a finished CH daughter (CH Capella).  And a first freshening Jupiter daughter earned her ADGA DHIR milk star in 2009. 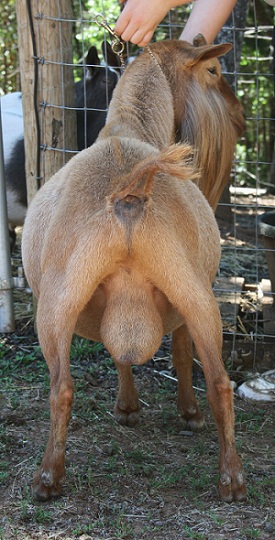 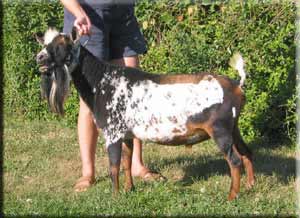 Height----23 1/5" This buck has his stamp on many, many champions and  top 10 milkers.
Thank you to Olde Mountain Farm for the use of these photos 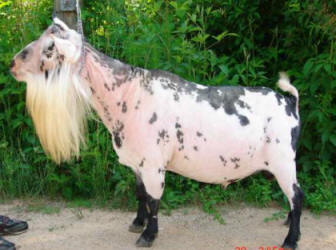 Kaco Yellow Rose Wild Card
This polled blue eyed buck put his stamp on a LOT of goats in Florida. He passed in 2014 and was a gentle, well loved goat. He had a high and wide escutcheon and wide, flat dairy character with a long level top line. He contributed his polled and blue eyed genetics to most of his get. 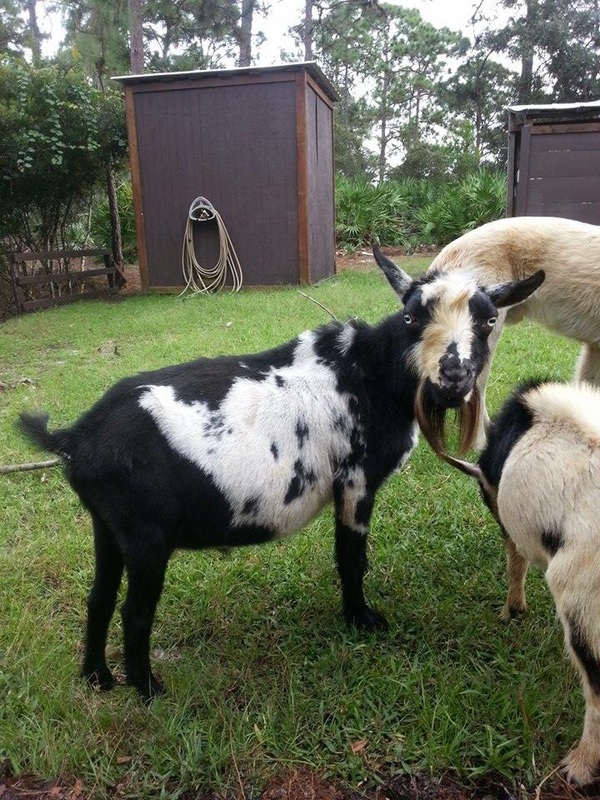